First and foremost to avoid any yield penalty, corn needs to be irrigated to black layer (R6) unless good rainfall has occurred to supply enough moisture to finish the crop to R6.  Because daily moisture use and growth is somewhat a moving target, we generalize how much water is used per day.  Moisture sensors are a good way to estimate your soil supply and be more direct in keeping enough moisture to the crop as you can get accurate picture of water content down through the root profile.  The following table comes from the UGA Corn Production Guide.

Estimated Water Use of Corn in Georgia**

Water use is at a maximum given the current environmental conditions, hot, humid, and getting drier. Last weeks blog entry focused on the yield loss to water stress that occurs during the last 2-4 weeks.  Any one with corn that doesn’t reach R6 or black layer for a little longer is in greater danger to yield loss so make sure to stay ahead of the daily water use.  Focus on the moisture holding capacity of your soil to inform you on how to maintain enough to meet the daily need.  Yield loss estimates ranges from 3% to 6.0% per day from milk stage and declining to about 1.5% per day as it reaches late dent to black layer.

1. Southern corn rust found yesterday in Terrell, Houston, and Bleckley Counties- looked like it had been there a little while. Picture is of infected stalk from Terrell County. Terrell County Ext. agent Seth McAllister says that the field is at “black layer” so no need to apply any more fungicide. Question will be not grain fill, but how well those stalks will hold up until harvest. 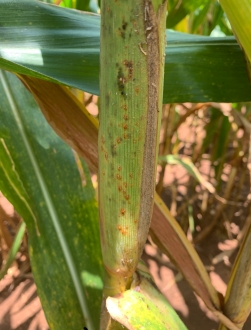 2. Second image is a foliar and vascular symptom of Fusarium wilt on cotton out of Turner County. Not faded foliage and discolored vascular tissue. Dead giveaways. Guy is also pulling nematode samples as Fusarium wilt here in GA goes hand in hand with nematodes. Guy suspects sting nematodes as he found no root galling to suggest root-knot nematodes.

Yesterday’s Update of the Midwest Corn Crop via NCGA members:

“Since last week, we had severe thunderstorm roll through with quite a bit of hail. Crops that were a leaf or two away from tasseling are down to just the stalks. They have no leaves left on them. Plants that were ten-foot-tall are down to my waist. Soybeans were decimated with only the main stem remaining. Our farm was better off than most, but every field has damage.”

“We have had drought in western part of the state and too much wind and water in the eastern. I happen to be in the Goldilocks zone. The forecast looks like we could get half an inch of rain Tuesday and Wednesday, but it looks hot and dry after that. Friends in the western part of Iowa say that if they have one more week of hot, dry conditions, it will be the end of this corn crop.”

The current conditions in the midwest corn belt are beginning to deteriorate a little.  Some of their soils are quite deep and will provide as much as 6 to 7 inches of moisture to get through the early grain fill but there are many areas that are not as fortunate.  We can be praying that their current conditions improve for them as well.

As all ways, if you have any questions feel free to email me at deweylee@uga.edu.

Keep up with agricultural news from AgFax

Keep up with agricultural news from AgFax

Need to check the weather?